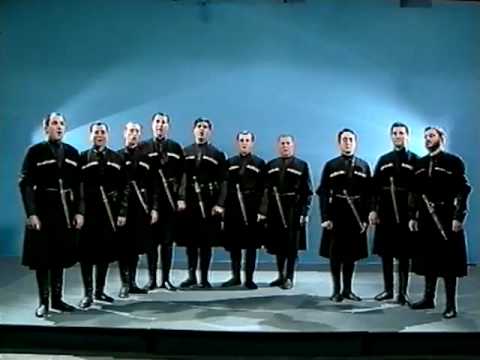 UNESCO: Representative List of the Intangible Cultural Heritage of Humanity - 2008URL: http://www.unesco.org/culture/ich/RL/00033Description: Popular singing has a highly valued place in Georgian culture. Polyphonic singing, in the Georgian language, is a secular tradition in a country whose language and culture have often been oppressed by invaders. There are three types of polyphony in Georgia: complex polyphony, which is common in Svaneti; polyphonic dialogue over a bass background, prevalent in the Kakheti region in Eastern Georgia; and contrasted polyphony with three partially improvised sung parts, characteristic of western Georgia. The Chakrulo song, which is sung at ceremonies and festivals and belongs to the first category, is distinguished by its use of metaphor and its yodel, the krimanchuli and a cockerels crow, performed by a male falsetto singer. Some of these songs are linked to the cult of the grapevine and many date back to the eighth century. The songs traditionally pervaded all areas of everyday life, ranging from work in the fields (the Naduri, which incorporates the sounds of physical effort into the music) to songs to curing of illnesses and to Christmas Carols (Alilo). Byzantine liturgical hymns also incorporated the Georgian polyphonic tradition to such an extent that they became a significant expression of it. Having previously suffered the drawbacks of socialist cultural policies, traditional Georgian music is now threatened by rural exodus as well as by the increasing success of pop music. In many archives one finds recordings of polyphonic songs from the beginning of the twentieth century; these recordings are, however, not secure enough to guarantee the long-term preservation.Country(ies): Georgia